Elon Musk's "blue check" debacle: His brain has been broken by whiny incels

For Twitter's angry nerds, the blue check is like a girlfriend — it's infuriating because you can't buy it 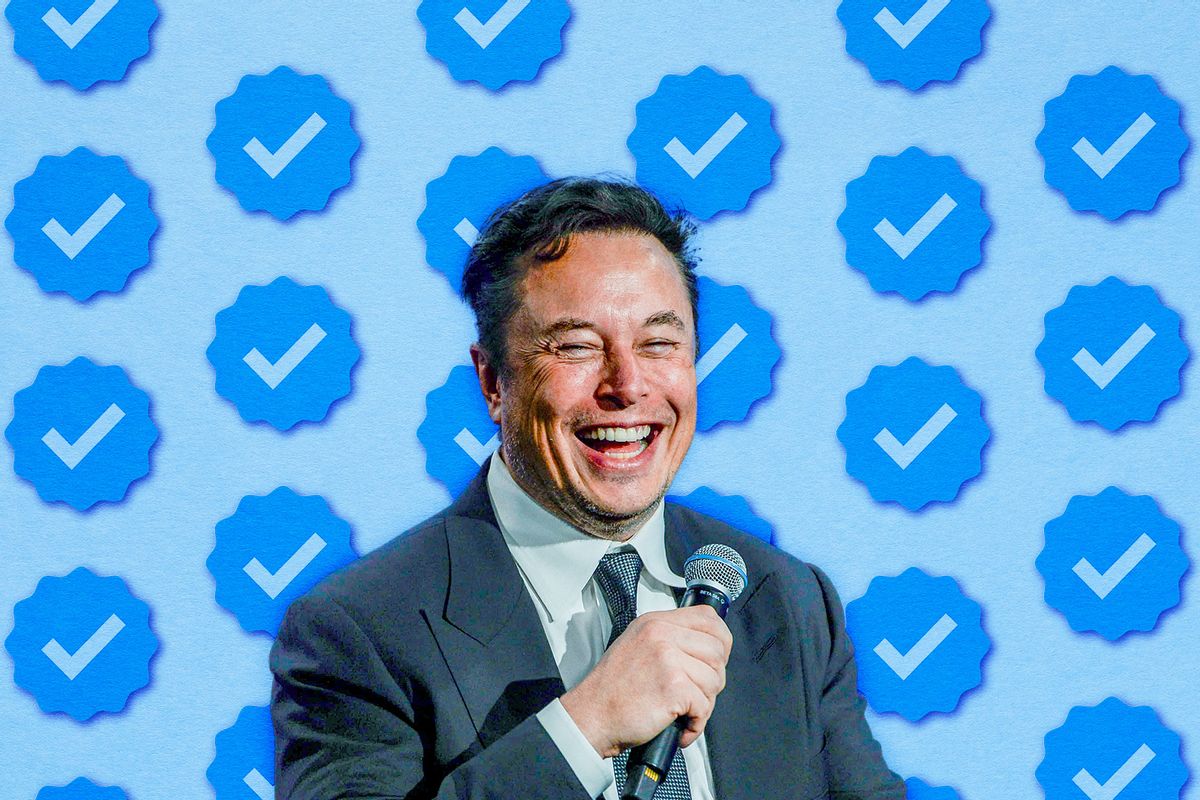 A week after Elon Musk acquired Silcon Valley's bluest white elephant, Twitter, the tech billionaire appears determined to live up to all the dark suspicions people harbor about him. His ideas on how to run the company seem to be borrowed directly from the worst people on the internet, dudes who spend most of their time toggling between spewing racial slurs into "Call of Duty" and griping on Reddit about how woke bitches won't have sex with them. That's because Musk's brilliant idea for making Twitter profitable is — don't laugh! — charging people a monthly subscription fee for having a blue check mark next to their name.

If you spend enough time in the disorienting chocolate factory-like hellscape that is Twitter, you will soon discover a shocking amount of resentment from right-wing nerds about the existence of the aforementioned blue check. Musk himself is channeling this resentment,  claiming he was doing this to end the "lords & peasants" system. But, as Edward Ongweso Jr. of Vice points out, by "elites," Musk — the richest man in the world — "more or less means journalists." He may think he's a man of the people, but he's a rich brat who cannot believe that anyone is allowed to talk back to him.

The little blue symbol is affixed to profiles, in theory, to indicate that "this person is who they say they are." In truth, it's become increasingly difficult to get one in recent years. It usually requires both having a relatively robust public profile and an employer who is willing to vouch that your persona matters to their bottom line or institutional standing. (I got mine because Salon organized it for every editorial employee with a prominent byline, for instance.) It's supposed to give Twitter readers a little more confidence that the person who's talking feels some protectiveness over their reputation and therefore won't be talking entirely out of their ass.

In practice, Twitter gave checks to people like Daily Wire head Ben Shapiro and Rep. Marjorie Taylor Greene, individuals for whom the ass does literally all the talking. As a gauge of information quality, it is deeply compromised. Still, combining the blue check mark with a quick look at someone's profile can help a user decide whether a tweet is trustworthy or not. Blue check mark plus a Twitter bio saying you work for NBC News? Probably OK! Blue check mark plus a job as a Republican official? Don't believe a word they say!

But if you listen to the perpetually aggrieved right-wing dorks who make up Musk's fan base, you'd think the blue check mark is a trophy being handed out by the Holy Order of Sex-Having Woke Elites. "Elite," of course, is defined not by someone having real power or money in the world, but by the parlance of right-wing resentment. Which is to say it's mostly about incel or incel-lite dudes who obsessively fear that liberals are cooler than they are, a fear that gets reinforced by their own suckiness and also because liberals would rather pull their own fingernails out than have a conversation with them.

In this worldview, the blue check mark is not about identity verification, but a symbol of the kind of social capital that those on the right perceive liberals as having that they don't have, one they simultaneously envy and loathe. It's this imagined prestige that fuels the narrative of the "liberal elite." In this worldview, right-wing billionaires like Musk or Peter Thiel are not "elite," and neither is Donald Trump, despite all his money and power. But adjunct English professors, freelance journalists and broke college kids in BLM T-shirts are "elite," mostly due to the haunting and not inaccurate MAGA fear that progressives get invited to cooler parties.

Of course, the left has plenty of geeks. Still, the sense that there's a coolness imbalance between left and right has some substance, as evidenced by the right's inexplicable desire to cling to Kanye West even after his career implosion. They really are so desperate for cultural cachet they'll settle for a celebrity who is almost entirely famous for how far he's fallen. More to the point, right-wing media has put their uncoolness right at the heart of their narrative about how badly they are victimized at the hands of the "elite," those arrogant people who read novels and wear clothes that fit.

This is why, for instance, we get periodic bouts of right-wing self-pity over polls showing that more people would refuse to date a Republican than date a Democrat. It fuels "cancel culture" whining, which is predicated on the notion that liberals are the sole arbiters of one's social status. (Having a comedy special or album that only conservatives buy may make you a ton of money, but it will never be cool.) Or Tucker Carlson's endless whimpering about how "elites" won't "let" you say all the vile things he says every single weeknight to an audience of millions. Or the "humor" of Greg Gutfeld of Fox News, in a protests-too-much segment about how college kids these days aren't good-looking enough.

The entire GOP has reduced itself to a dude in a bar who tries to buy you a drink, and when you decline, says without conviction, "You're not that hot, anyway."

This fixation on unattainable cool intersects with right wing ideology in one substantive way: It disproves the core assumption that the "free market" has an all-encompassing explanatory power. It's not just that money can't buy happiness. The one thing capitalism tells us should be available as a commodity — social status — is still elusive, even with an open checkbook. After all, Musk is the richest man in the world, but that fails to conceal the fact that he's a total wanker.

Indeed, the anger that anything of value in this world could be unavailable for purchase was inadvertently expressed by right-wing millionaire David Sacks, who, like Musk, didn't let his own blue check get in the way of drumming up dork rage-fits over middle class "elites" who got them because of their professional status.

All of this only lends credence to the theory that libertarianism largely exists as an ideology because social miscreants get attached to the idea that money should matter more than social skills or reputation.

You can't buy the Twitter blue check, at least not yet. It's really more a service to readers than to those with the check marks. But distorted through the right-wing resentment field, it becomes a stand-in for all the other symbols of social capital that are not for sale and therefore considered "elite": Cool friends, a sense of style, skill at flirting, an ability to communicate without making people back away slowly.

Musk's plan to make the blue check a subscription-only feature makes clear how strongly he's channeling the topsy-turvy worldview of his right-wing dweeb fan base. They were, of course, ecstatic, believing that their billionaire geek god might allow them to purchase the social stature that they can't earn with their labor or personality. Musk himself sold it this way, dialing up the grievances of those who want to believe that paying $8 a month for a blue check will somehow spite people they envy and fear.

There's a problem, though: The so-called "elite" that they hate finds the entire idea silly. First of all, to people with a foot planted in the real world, the meaning of the blue check hasn't changed: "This person is who they say they are." It's only angry nerds who imbued it with prestige. More to the point, to make the blue check mark a pay-to-play feature literally strips it of its current meaning. We can expect a bunch of scam artists and MAGA-hat nobodies to pony up eagterly. People with actual professional reputations, meanwhile, won't pay for something that confers no meaning other than "I have $8 a month and very little sense."

Musk reacted to all these sensible criticisms with a 4chan-style meme that misses the point entirely, but wallows in right-wing pique over the supposed snobbiness of liberals. Yep, right down to the bizarre conservative complaint that going to Starbucks, a chain with more than 15,000 locations in the U.S., is somehow a sign of liberal hoity-toitiness.

His fanboys swooned over how he sure did stick it to Becky the cheerleader, who drinks pumpkin lattes and wouldn't go to prom with them. But it's not clear how that's supposed to convince anyone to actually pay for a blue check. It only confirmed the suspicion that a blue check will stop being a marker of public officials, celebrities and journalists, and instead signal that this account is run by someone you would cross the street to avoid.

There is no way to kill Twitter off more quickly than handing it over to people who think female Jedis or Ghostbusters are the greatest injustice since slavery. Maybe that's just as well, as the platform is already overrun with terrible people and makes even decent people act like their worst selves. It has only survived this long because it has lingering value for politicians, journalists and other public figures who want to promote their work and their point of view. Free blue checks for those folks served Twitter most of all, creating the promise that there were some reputable people saying valuable stuff on the platform. The more Musk works to "democratize" the platform by collapsing the distinction between trolls and non-trolls, the less reason there will be for anyone to use it.

Amanda Marcotte is a senior politics writer at Salon and the author of "Troll Nation: How The Right Became Trump-Worshipping Monsters Set On Rat-F*cking Liberals, America, and Truth Itself." Follow her on Twitter @AmandaMarcotte and sign up for her biweekly politics newsletter, Standing Room Only.